An important aspect of Pony Club is the certificates (formerly known as ratings) It is an opportunity for the member to test themselves against the Standards of Proficiency. It provides a consistent way to measure a riders knowledge and ability and is a strong motivator for the Pony Clubber to strive harder and study more to advance in their certificate level.

Twice a year ratings are offered to our riders who wish to advance. This fall we had three of our members accept the challenge. Ivy Jean, who is in her first year, tested for her D-1 certificate. She was a well prepared and confident candidate who passed with flying colors. Ivy Jean had to demonstrate a large knowledge base in the basics of horse management. Some of the topics covered were feeding her pony, knowing how to cool him out, grooming and saddling. She also had to demonstrate her mounted skills such as mounting, walking, trotting, halting and riding over ground poles in jumping position. We are all proud of Ivy Jean for a job well done! 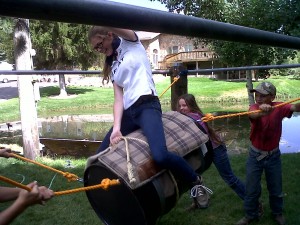 Two more of our girls tested for their Certificates. Amee went for her D-3 and her sister Lisa for her C-1. As these girls are moving up in the Standards their testing was quite lengthy and it took the greater part of the day. Not to mention, the girls put in a great deal of time in advance to study their Pony Club Manuals . As a D-3 Amee had to show an expanding knowledge base in many areas such as conditioning, nutrition, conformation, lameness as well as showing how to apply a polo wrap and keep a detailed record book for her horse. Lisa’s testing reached further into the horse management by building upon her D-3 knowledge in greater detail as well as being able to apply stable wraps and continuing with her record book. The girls both had very successful rides demonstrating more advanced skills such as riding without stirrups, emergency dismounts on a moving horse, rein backs and much more. Amee had to jump the majority of her jumps set at 2’3″ for stadium and cross country while Lisa jumped 2’9″. Lisa was presented with an additional challenge as her horse had been seriously ill prior to the testing and she had to make a last minute change to a borrowed mount. Once again our girls diligent work paid out and they passed their tests. 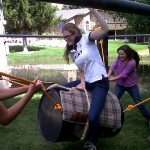 A big thank you needs to go out for the support from the parents and other team members who volunteered their time and efforts to cheer on and provide food and drinks for the girls who were being examined. And a special thanks to Chris Yost for opening up his home and barn to finish the testing after the riding portions were completed.